With a future military base in Djibouti, yuan the official currency of Zimbabwe, a 74 billion dollar investment plan for the continent announced last December by president Xi Jinping, it is currently fashionable to condemn China for “hijacking” Africa and for adopting a neo-colonialist attitude. An opinion clearly not shared by Khartoum, a great partner of the “Middle Kingdom”.

On September 3, 2015, Omar al-Bashir, along with many heads of state and UN representatives, attended a military parade in Beijing commemorating the 70th anniversary of the end of the Second World War. An occasion for the Sudanese president and his Chinese counterpart to sign a strategic cooperation accord. It clearly had not escaped China that, at the intersection of many “Africas” and bursting with particularly prized natural resources, Sudan is surely: strategic! Nothing new there. Director of the Arab Institute at the University of Foreign Languages in Beijing, Xue Qingguo sees in this Sino-Sudanese relationship a first model of its kind that can be applied throughout the Arab world: « China and Sudan have cooperated on oil exploration projects since 1995. These types of projects offer an example of cooperation characterised by mutual benefits. »

Transport Minister Makawi Mohamed Awad, unsurprisingly, does not contradict this, calling it a « win-win relationship » which he openly describes in the following terms: « They bring us their technology, equipment and expertise. Their money too. In return, they take advantage of their activities in our country to develop their economy. » So don’t go talking about « neo-colonialism” to someone who, as former Oil Minister, had long collaborated with Chinese businesses. This affable speaker switches off his natural bonhomie to underscore his seriousness: « We don’t know what the word ‘colonialism’ means. Like all Africans! What I’ve described to you about our relationship bears no resemblance to colonisation. Indeed, Westerners give us the impression that they want to revive the era when they were able to grab our resources without giving us anything in return… » 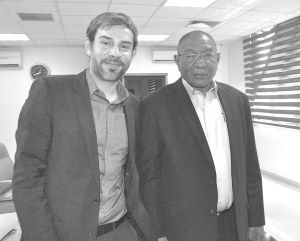 A message that he drives home with an outstretched arm, coming straight to the point: « If the Europeans and Americans want to work with us in the same spirit, no problem. » Really? « We collaborated with Americans and European in the past for a long time. Why couldn’t we do so again tomorrow? » An overture that barely conceals the unmistakeable annoyance in the minister’s words. No need to emphasize further, his anger is clear to see: « What’s annoying is not so much that the Americans and others aren’t coming to Sudan. It’s that they don’t want anyone else to set up there and take their place! »

For the Transport Minister, « Whether the United States or any other country sanctions what we’re doing, is their business! They’re free to do so but they don’t have the right to dictate their standards to sovereign states. They don’t have the right to threaten with reprisals Chinese businesses that entirely legally want to work with us! China, for its part, doesn’t interfere in our affairs: they think of their own interests without scorning ours. That’s the big difference compared to the United States. » And we should make it clear that although China doesn’t meddle in domestic politics, it has always defended Sudanese interests – which are ultimately its own – to the UN. Not the only heavyweight support as, less openly but more and more actively, Russia is getting into the act…